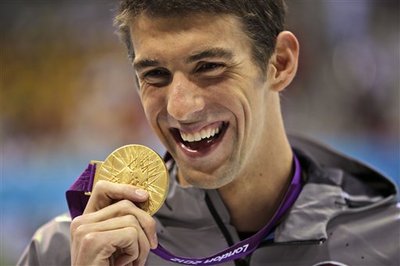 American swimmer Michael Phelps ends his career as the most decorated Olympian with a total of 22 Olympic medals. (AP Photo/Matt Slocum)

American swimmer Michael Phelps ends his career with 22 Olympic medals, which come from the 24 total Olympic events that he had competed.

Phelps has won more overall medals than any other Olympian, which he added to his career resume after winning his 19 medal in London to pass gymnast Larisa Latynina (USSR), who ended her career with 18 medals.

Phelps also has the record for most gold medals with a total of 18 gold medals, 11 of which are individually won gold medals. There is no other Olympian that has more than 10 gold medals.

One of Phelps’ gold medal wins came in his last individual race, in which he rallied back from seventh place at the turn to win the 100 meter butterfly, with a time of 51.21 seconds for his 3rd straight win in the event at the Olympics.

The last of his four gold medals in London came from a victory in the 4×100 medley relay, with his teammates Matt Grevers, Brendan Hansen, and Nathan Adrian.

His most notable Olympics, came in 2008 at the Beijing Olympic Games winning eight gold medals to break the record for the most first place finishes at any single Olympic Games.