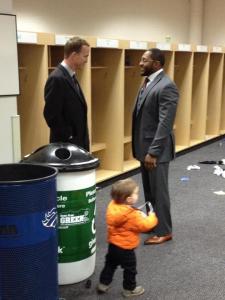 With many story lines coming out of the playoff game between the Baltimore Ravens and Denver Broncos, the most important story lines had to include a team captain from each side of the field.
Those captains would be Ravens defensive captain Ray Lewis, who is said to be in his final season, and Broncos offensive captain Peyton Manning, who is a strong candidate for MVP to complete his comeback season after sitting out the entire 2011 season due to a neck injury.
Both players have one goal, which is to reach another Super bowl. Each play has one ring but with their careers both getting closer and closer to ending they continue to strive for that final chance.

Four quarters were not enough for either the Denver Broncos or Baltimore Ravens to decide a winner.

The first four quarters were even from a scoring stand point with both teams scoring 14 points each in the first quarter and seven points in each of the last three quarters of regulation before going into overtime.
The two teams had to play in double overtime before Ravens’ rookie kicker Justin Tucker

kicked the 47-yard game winning field goal to win the AFC divisional matchup.
The Ravens were led on offense by quarterback Joe Flacco and wide receiver Torrey Smith, who proved to be a real playmaker for the Ravens.

Flacco and Smith connected for two touchdowns through the air against the Broncos’ defense.

Smith was able to capitalize against Broncos’ veteran cornerback Champ Bailey, who covered Smith for most of the game.
Smith finished the game with three catches for 98 yards along with his two touchdown catches.

Ravens wide receiver Jacoby Jones had two catches, with 70 of his 77 yards coming on a touchdown catch with 31 seconds left in the 4th quarter to tie the game and force the game into overtime.
Flacco went 18 of 34 for 331 passing yards and 3 touchdowns.

Running back Ray Rice rushed for 131 yards and 1 touchdown.

Lewis had a game-high 17 tackles including a tackle for a loss.

As for the Broncos, return man Trindon Holliday became the first player in NFL history to return a punt and kickoff for a touchdown in a playoff game.

Prior to the playoff game, Holliday had been on two different teams during the regular season, the Houston Texans and Broncos. While he was on the roster of either team, that team never lost a game when he was on their roster this season.

As for the offense, Manning went 28 of 43 for 290 passing yards and three touchdowns. Manning also had two passes intercepted by cornerback Corey Graham, one of which was returned for a touchdown.

With the win for Baltimore, Lewis will suit up at least one more time in his career for the Ravens as they move on to the AFC championship game to play the winner of the Texans game against the New England Patriots on Sunday.