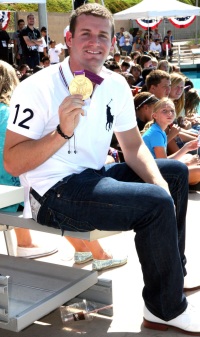 Residents of Riverside, among others gathered at the Riverside City College Aquatic Center to honor Olympic swimmer Tyler Clary on Sept. 8th.

He won his first career Olympic gold medal for the men’s 200 meter backstroke event in London, with a time of 1:53.41, which set an Olympic record.

“It was a big deal in my mind for my career and my confidence,” Clary said.

Clary never led the race until the final 50 meters. After a slow start, he made a strong effort on the final turn that got him into second place to start the final 100 meters of the race, which eventually led to Clary catching up to the defending champion, Ryan Lochte, who was currently leading the race.

“The other two guys that medaled in that event are capable of some pretty extraordinary things. I knew it was going to be a dogfight,” Clary said.

Lochte previously held the record before Clary, in the men’s 200m backstroke with a time of 1:53.94, which he set at the Olympic Games in 2008 at Beijing.

After breaking the record and winning his first gold medal, Clary looked up and pointed a finger toward the roof of the Olympic Park Aquatics Centre, as a way to honor his high school swim coach from Riverside Poly, Kevin Perry, who had passed away of cancer.

“(He) got me to where I am today,” Clary said. “He’s definitely looking down and smiling.”

Clary also took to Twitter in the early morning hours following the race, as he tweeted about his performance and what went through his mind at the time.

“All I could think about after I saw that result was my high school coach Kevin Perry who passed away during my freshman year of college.”

Clary now has a chance to be a role model to younger swimmers, and have the same impact Perry had on Clary during his career.

Clary spoke with students at Eastvale Middle School in Eastvale, CA, the day before the ceremony at RCC.

“I will never forget walking from the stage back off the field and they were just reaching out to touch the medal,” Clary said. “It was very inspiring for me, just knowing I am having this effect on this many young people.”

RCC swimmer and water polo player Andrea Antonissen believes that Clary’s performance at the Olympics may have a huge impact on the aquatic programs in Riverside County.

“I know that it means a lot,” Antonissen said. “The Inland Empire has a history of quality swimmers, and (Clary) exemplifies that.”

Antonissen also thinks that Clary could be a role model and someone that young and beginning Riverside County swimmers may begin to emulate when they compete in the pool.

“I think that it will give the young swimmers a new perspective and goals,” she added.

Clary understands that his recent success can be an inspiration to aspiring swimmers.

“If you look back at my history and where I come from,” Clary said. “If I can do it anyone can do it.”