The NFL has done it again folks, what a great Wildcard weekend we had last week. Every game except for the Chargers/Bengals went right down to the wire, and most importantly it was fun. The Guru went (1-3), but a new week is upon us and four more intriguing matchups are coming up.

I have to give credit to Andrew Luck, for being the luckiest guy on the face of this earth. Somehow, Andy Reid and the Chiefs blew a 28-point lead to keep the Colts in the playoffs and survive to the next round. Yes, it was a fascinating game, but it really shouldn’t have been. Andrew Luck got a win, but let’s not act like the Chiefs didn’t absolutely CHOKE either.

Drew Brees and the Saints won a playoff game on the road. To be honest, Nick Foles looked like a guy who was in the playoffs for the first time. The moment was too big and the lights were too bright. I had no business picking Philly to win, none at all.

I’m not even going to discuss the Chargers/Bengals game. But, I will say this. Everybody should have seen this one coming. My father  played outfield back in highschool on the baseball diamond and he was a decent player. Once, he was called in to pitch. Seven runs later, and still in the first inning, the coach came out the mound, extended his hand for the ball and simply stated “Son, you just don’t have it”. Marvin Lewis needs to do the same with Dalton if he wants to keep his job. It might be too late.

In probably the most intriguing matchup of the four last week, the 49ers traveled into the frigid Wisconsin winter and defeated the Packers on a field goal to end the game. Colin Kaepernick ran his way past the Packer defense for a huge victory. The story was simple, San Fran kept Rodgers in check, and the Packers defense played like…the Packers defense.

Before I make my picks for this week, I would like to shed a few thoughts on some NFL news from last week.

EXTRA EXTRA!! READ ALL ABOUT IT. Roger Goodell wants to expand the NFL playoffs. Initially, I was thinking, why change something that isn’t broken? The NFL is a great product as it is, there just isn’t a need to change it at all. But, as I pondered over the question at hand, what could make the NFL better than it already is currently? DING DING DING!!! There was ONLY one acceptable answer. More football. No, not two extra regular season games, more postseason football.

Giving one more team from each conference the opportunity to make the playoffs will not hurt the game, it can only help. Fans can not get enough NFL action, so the simple solution is to give us more. 12 out of 32 teams make it into the playoffs under the NFL’s current format. Compare that to 16 out of 30 in the NBA, which is overkill and sort of watered down. 14 out of 32 seems like just the right amount to me.

Just before a big playoff weekend, the sports website Deadspin published an open letter by former Minnesota Viking Chris Kluwe, titled “I Was An NFL Player Until I Was Fired By Two Cowards And A Bigot.”

Kluwe, a straight man, says his outspoken support of same-sex marriage cost him his job.”In my mind, there’s no logical conclusion that can be drawn, other than that I was fired for my activism,” Kluwe told  Michel Martin, host of NPR’sTell Me More.

Chris Kluwe clearly doesn’t have a clue. Sir, you were not fired for your outspoken support of same-sex marriage. You were fired because you’re a “P” word. PUNTER. And, not a very good one at that.

Let’s check the stats from 2012, the last year in which Kluwe punted for the Vikings. That year, Minnesota ranked 22nd in the league for average punt yards, and get this, Minnesota ranked 31st in punts downed inside the 20 yard line. Maybe, just maybe the Vikings could accept a mediocre punter who did his job (not well might I add) and jogged off the field like the 31 other nameless punters in the NFL. But when the punter, YES THE PUNTER, decides he means enough to a team that he can run his mouth and be an activist for any and every issue he sees a problem with, a line might have to be drawn at some point. This  isn’t a one time thing for Kluwe.

He has a history of not being able to cope with the fact he is a punter, and quite frankly he is to be seen kicking and not heard. Maybe, the Vikings kicked you out of their organization because you weren’t all that good, and you brought a lot of attention to yourself, which made you replaceable.

Honestly, when you aren’t that good, you should probably hope no one notices. But, when my below league average kicker is drawing fines for wearing Ray Guy patches over his jersey and can’t seem to shutup… 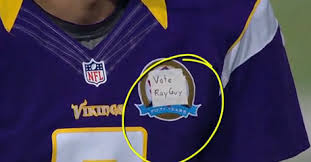 Well, eventually it raises eyebrows within the organization. Nobody likes distractions that take away from the game. Especially when those distractions come from a “P” word. PUNTER.

I’ve said it once and I’ll say it again, in the playoffs, DEFENSE AND QUARTERBACK play win games.

Saturday, the Saints take on the Seahawks on the road in Seattle. Now, we could all take the NO win last week and say the monkey is off the backs of the Saints after getting a road win over Philly.

One slight problem with that theory. A gorrilla is about to hop on. The Seahawks are not the Eagles and this is going to be a serious problem for New Orleans.

If Sean Payton can dig into his bag of tricks and catch Seattle off guard, maybe they can find some momentum and get things going. But, I don’t see it happening. Give me Seattle by four.

Vegas has New England as seven point favorites at home against Indy. As I mentioned at the top of this article, Indy was very fortunate as they accepted a late Christmas gift from Kansas City to win that game. KC had an epic collapse, but Indy showed poise as they fought back and got the win. However, the start of that game still has me concerned. Get down like that to Tom Brady, and he will step on your throat and keep you there. I’ll take New England.

My upset special goes to Carolina yet again. But, wait there has been a late breaking development. I was prepared to bash the Vegas oddsmakers for making Carolina 3 point underdogs at home and go into this long argument about how Carolina never gets any respect. However, it’s late Wednesday night and the lines have changed.

This game is ranging anywhere from Carolina by 1 to San Fran by 1. Some places in Vegas have it dead even. I knew something was up with that initial line when the game opened up. Anyway, these teams met in week 10 and Carolina edged out a 10-9 win. Expect another defensive struggle.

I don’t think Cam or Kaep will play lights out games so the defenses will decide this close one. This might come down to who has the ball last. I will keep this game as my upset special because the pundits at ESPN still haven’t given the Panthers a legitimate shot.

Finally, I’ll take the Broncos over the Chargers this week. This will be the third time these teams have met up with both teams splitting a pair in the regular season. As I’m writing this, I realize how scary of a pick this really is becoming.

On one hand, all my logic tells me that the Broncos are light years ahead of the Chargers as a team goes and really should win this game by two or more scores. But, this is a playoff game and a few rules apply.

1. Throw out all logic

2. These two teams are division rivals

That said, I just don’t foresee a scenario where Peyton Manning doesn’t get out of the divisional round again. If he does not succeed, (forgive me for doing this) we will be forced to compare him with

ALL HE DOES IS WIN

Thanks for reading everybody. I love all of you, and if I am your enemy, it is only because I DARE..to tell you the truth…COURAGE