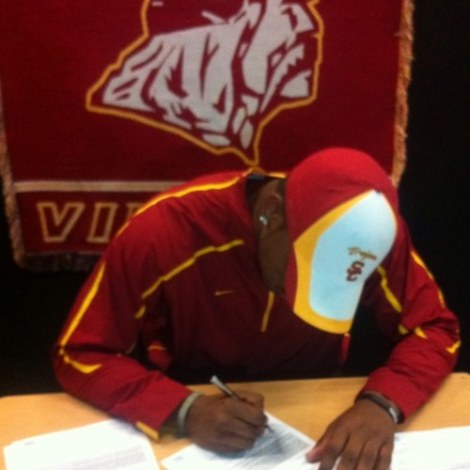 Jabari Ruffin signs his letter of intent to play football for USC beginning in the 2012 season.

Downey High senior linebacker Jabari Ruffin signed his letter of intent to play football, beginning in the 2012 season, for the University of Southern California.

Ruffin signed his letter of intent on February 1st, which is known as National Signing Day, a day in which many high school athletes sign a letter of intent to the school they plan to attend.

“For USC fans, be ready for the commitment, that I’ll bring forth, the work ethic, and the hard work.” Ruffin said.

Since Ruffin verbally committed to USC on March 2, 2011, he has visited the campus of USC with other recruits several times to look at some of the things the program has to offer and to get to know some of the other incoming freshman and his future Trojan teammates.

Ruffin will be part of the first recruiting class, along with the other Trojan incoming freshman, to join the football team under program imposed scholarship limitations due to sanctions.

Ruffin, who is ranked as the top outside linebacker in the country, feels he is ready to contribute to the Trojans as early as next season.

“I have no intentions to red shirt (while at USC), I am going to come in and make an impact right away.” Ruffin said.

Ruffin was also selected as a team captain for the West team in the U.S. Army All American Bowl, that took place on January 7th, which is a all star game that involves many of the top high-school football players in the country.

“I did not expect to be a captain but they said I stood out as a leader with my performance.” Ruffin said

The captains for both the East and West teams were voted on by both players and coaches for their respective teams.

After the returning to California from Texas, where the All American game was held, he felt bless to have participated in the game, with some of the countries best athletes.

“I was blessed to have a starting spot, I came back excited, it was a very humbling experience.” Ruffin said.

Past participates in the game have been players such as Eagles quarterback Vince Young, Dolphins running back Reggie Bush, and Vikings running back Adrian Peterson.

Along with playing in the game itself, the players got to meet many current NFL players.

Ruffin took away something that, Chiefs safety Eric Berry had said, which was to separate yourself and be that guy. Be different.

Ruffin has already began to feel the warm welcome from his coaches and by Trojan players, who are currently on the team, including wide receivers George Farmer and Robert Woods.

Despite the excitement that comes along for every athlete on signing day, Ruffin had a heavy heart and his thoughts mainly on his grandfather, who had passed away a day before Ruffin would sign his letter of intent.

“He was a (huge) USC fan, and I plan to dedicate my first game at USC to him.” Ruffin said.

Ruffin is appreciative of all the support he has received in his football and school career.

“Thanks to my family and everyone in Downey for their support and a special thanks to (Downey High head football coach) Jack Williams.“ Ruffin added.

4 responses to “Ruffin signs with Trojans on National Signing Day”