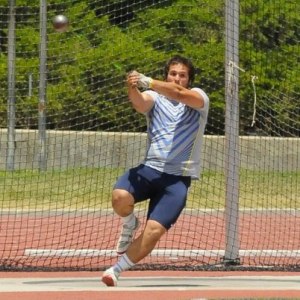 Class of 2011 Downey high graduate Isaac Dan reflects on his first season as a member of the University of California, Berkeley track and field team.

Dan capped his first season with the Cal Golden Bears after finishing in 19th place in the hammer throw at the 2012 USA Junior Outdoor Track and Field Championships in Bloomington, Indiana.

“I was happy that I hit the mark I needed to qualify because it was my first year ever throwing hammer,” Dan said. “I was pleased; I could say I was top 20 in the country for my age group.”

Dan feels that his first season at Cal is “defiantly” something he can build off of coming into his second season as he will likely compete in both the indoor and outdoor track seasons.

“The two seasons take a lot out of you,” Dan said. “Last year I redshirted indoor and competed in outdoor.”

Dan originally planned to redshirt both indoor and outdoor track and field seasons.

“I was going to redshirt both but I started doing well halfway through outdoor, so they pulled my redshirt,” Dan added.

Despite only competing in the outdoor meets during his first season he has taken note of a few differences between the indoor and outdoor seasons.

“With preparation, indoor is different because there is no discus, and instead of hammer they have the 35 pound weight throw,” he said. “We throw a lot of weight during the fall and early winter to prepare for indoor on top of the other events.”

Cal was his dream school and a place in which he could reach his full potential especially with two seasons to participate in per year, instead of the single spring track season that high school athletes are custom too.

“Once I started looking at where I wanted to go to school, Cal became one of my dream schools,” he said.

“When they began recruiting me it was a dream come true to have the opportunity,” he added.

Dan feels that since his arrival to Cal, he has discovered a “whole new world of track and field, with people who are crazy for the sport.”

“(Dan) is really committed to being a teammate before anything else,” Cal teammate Evan Barr said. “I notice the effort he makes.”

Dan and his teammates feels that his technique is “night and day” compared to how it was in high school and entering his first season with Cal.

“(Dan) has been a great training partner, and his skills in the hammer throw have greatly  improved,” said Cal athlete Sullivan Parker.

“I like the hammer because it’s a technical event. I feel like I’m naturally better at hammer as well,” Dan explained.

Aside from his current track and field journey at Cal, Dan has a few goals set for the future which includes graduating with a degree in public health, which is a biological science.

Dan also is working on a few goals to help continue his athletics career after Cal.

“I am currently in the process of getting my dual citizenship for Argentina, so I can have the opportunity to compete for their national team in the future if I get good enough,” Dan said.